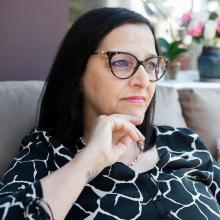 Figen Murray is the mother of Martyn Hett, who at 29 years of age was tragically killed alongside 21 others at the Manchester Arena terrorist attack in May 2017.

Since the Manchester Arena attack, Figen has been working with the Government and the security industry to make the tangible changes that can help ensure no other family has to go through what hers has. She is the force behind Martyn’s Law (Protect Duty), a legislation requiring publicly accessible locations to improve security against the threat of terrorism. Her ambitions to better understand counter terrorism saw her achieve a distinction in a counter terrorism master’s degree from the University of Central Lancashire.

Figen’s dedication and work in counter terrorism saw her awarded an OBE in the 2022 New Year’s Honours List. She is also a Visiting Fellow for the Institute of Strategic Risk Management and an Associate Member of the Security Institute.