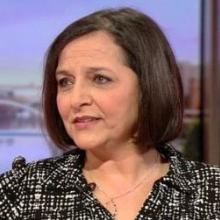 Figen Murray is the mother of Martyn Hett, who at 29 years of age was tragically killed in the terrorist attack at the Manchester Arena in May 2017.
Figen is now committed to her mission of promoting peace, kindness and tolerance in Martyn’s memory, while also working towards tangible changes that can help ensure no other family has to go through what hers did.

Figen commits her time to talk to young people in schools, colleges and universities educating them about the dangers of radicalisation and is also the force behind Martyn's Law, a legislation requiring entertainment venues to improve security against the threat of terrorism, and one that requires that all venues in Manchester have a counter-terrorism plan.

Her petition to make Martyn's Law mandatory has received over 23,000 signatures and is now on its way to becoming a reality.

She has also just been presented with the Outstanding Contribution award at the 2020 Counter Terror Awards for her efforts in stopping terrorism.